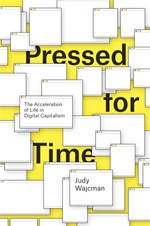 Professor Judy Wajcman has been given a science book award for her work Pressed for Time: The Acceleration of Life in Digital Capitalism (Chicago, 2015).

Professor Wajcman, who is the Anthony Giddens Professor of Sociology at the LSE, was given the  2017 Ludwik Fleck Prize, which recognises outstanding books in the area of science and technology studies (STS).

Pressed for Time challenges commonplace myths about work, leisure, and digital technologies. It argues that we are not mere hostages to communication devices, and the sense of always being rushed is the result of the priorities and parameters we ourselves set rather than the machines that help us set them.

The Ludwik Fleck Prize committee said they were “deeply impressed with the way that Wajcman built her argument, seamlessly blending theories of modernity and social acceleration with much empirical research on issues of time-use, housework, and family life.

“She shows us the continuities between the pre-digital and digital era, and points to possibilities for crafting more satisfying lives of work and intimacy – particularly by opening up technological design to a wider range of social groups and interests.

“Pressed for Time is an admirable work of STS scholarship and a must-read for everyone inhabiting our fragmented temporal landscape.”

Professor Wajcman’s first post was at the University of Edinburgh, and since then she has held various positions, including Sociology Professor in the Research School of Social Sciences at the Australian National University. She has published widely on the gender relations of technology, and her most recent book is The Sociology of Speed: Digital, Organizational, and Social Temporalities (2017, edited with N. Dodd).

The Ludwik Fleck Prize is named after microbiologist Ludwik Fleck (1896-1961), author of The Genesis and Development of a Scientific Fact, and the prize is bestowed by the Society for Social Studies of Science (4S).

Accepting the prize, Professor Wajcman, a long-standing BSA member, said she was “thrilled to be awarded the Fleck prize. It is a tremendous honour and has particular resonance for me as I share a Polish Jewish ancestry with Ludwik Fleck.

“I have spent my academic career in sociology departments and my aim in Pressed for Time was to bring an STS perspective to bear on mainstream sociological debates about temporality, speed and modernity that are still largely uninformed by our scholarship.”